POLYPHRASE is a stereo echo and looping device inspired by early proto-digital delays of the 1970’s like the Lexicon Prime Time. As sophisticated as it is easy-to-use, Polyphrase is capable of everything from rich, dubby rhythmic repeats, to metallic resonant flanges. It is unique in being able to generate loops as long as 22 seconds, opening up a new palette of sonic possibilities for the avant-garde, ambient, or adventurous musician.

Polyphrase features two independent SLIDERS for left and right delay times that can be locked into an infinite feedback loop which will produce an ever-changing sample of audio as each channel overlaps with another. This makes Polyphrase a tool for exploration capable of achieving the same kind of harmonic oscillation found on Steve Reich’s seminal tape piece “Piano Phase”.

The TIME knob interacts with the left and right faders by providing nine different maximum delay times starting at 85 milliseconds, and doubling in value as the parameter is increased up to 22 seconds. Each new delay section is cross faded into the signal path, an important design consideration that avoids any pitch shifting artifacts and is useful for creating new and often unexpected musical phrases when used with high repeat settings.

Three ECHO STYLES are available, and each style configures its own dedicated routing for the delay feedback path. “Dual stereo” provides two independent echos, and they can either be stacked in mono, or routed out of each stereo channel. In “ping pong” mode, each delay feeds back into the other, creating either a classic stereo ping pong sound (with each repeat bouncing between the left and right channel), or a multi-tap delay effect (when used in mono). The last mode is a mono delay - it routes the feedback path to the IN R, OUT R jacks so that you can use external effects in the echo’s feedback path.

The TONE control is a bipolar equalizer (EQ) situated in the feedback path of the echo. At 12 o’clock, the EQ has no effect on the audio. Turning the knob clockwise cuts low end - making each repeat brighter than the previous. Turning the tone knob in the counter-clockwise direction cuts high frequencies - it creates darker repeats, which- makes Polyphrase capable of achieving similar timbre to the storied analog, bucket-brigade delays.

The echo signal can be pitch modulated with the RATE and DEPTH controls for a sine wave style chorus / vibrato, or with a random wave for detuning effects similar to aging tape echos.

Finally, Polyphrase has a fully featured MIDI INPUT that provides tempo sync, full remote control of all parameters on the faceplate, and access to 9 onboard user preset slots.

- Delay times from 5 milliseconds to 22 seconds

- Tone control in the feedback path 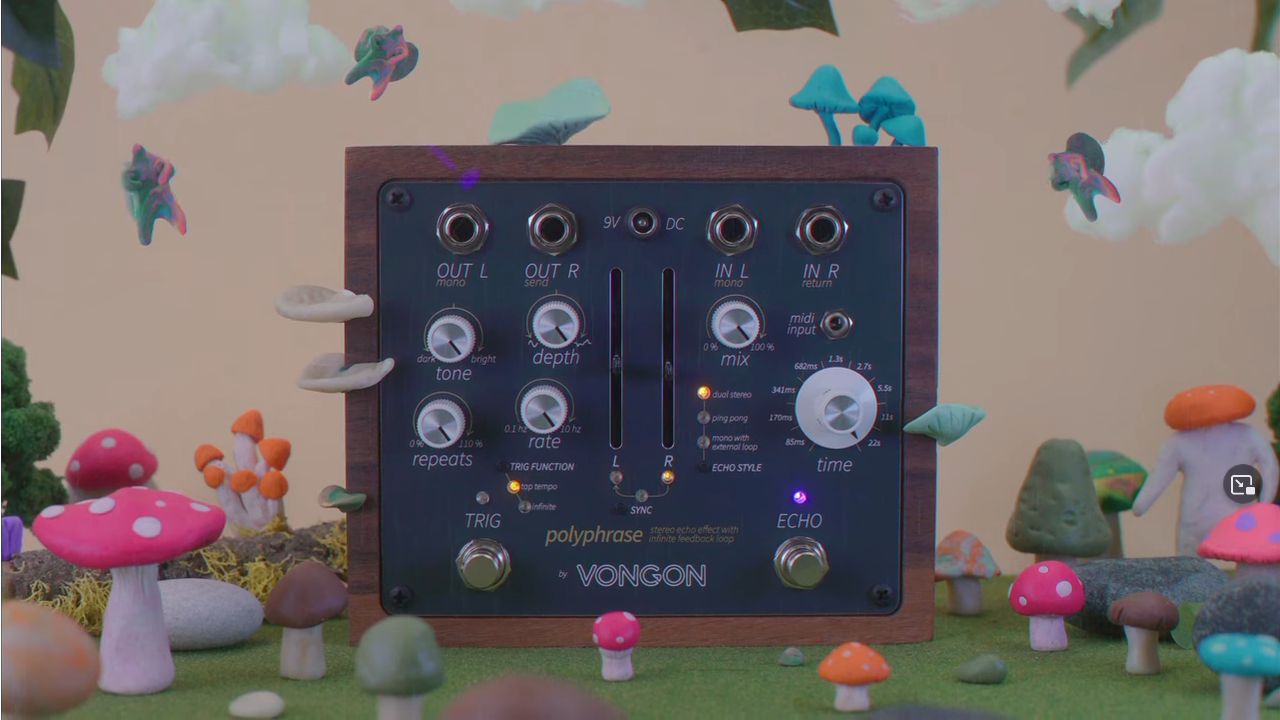